To China, and don't spare the warriors

A post written in November 2016, during my first trip to China, with my film The Closer We Get: 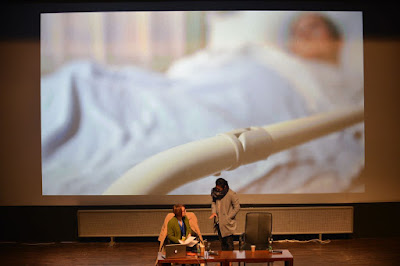 Beijing to Xi’an
I travel to China the day after Trump’s victory in the US election, and the social media control combined with the fact that it’s Just Not That Big A Deal Here has it feeling like a bad dream pretty soon. Until an American-Chinese woman working on the event I’m at tells me how the trauma made her forget to take her passport to the airport in LA, I’d all but forgotten about crying in front of the BBC news at 6am that morning.

If I was going to do a Tripadvisor review for our Beijing hotel (The Traveler (sic) Inn) – and who knows, I just might – I could complain about the tepid bath water, the flea I found biting my shin, and that the sound on my TV didn’t work, but I would praise its globetrotting breakfast (steamed buns, waffles, tofu, conflakes), its atmospheric little garden and chiefly its location, on a central but quiet ‘hutong’ fascinating enough to spend your entire Beijing break in. These higgledy piggledy, low rise areas which mix houses old and new with shops, restaurants and bars of every variety, are being fast cleared away by the city authorities, so I feel lucky to be staying in one and not one of the shiny highrises by the motorway, even if they do offer power showers. Every eating place I tried locally was fantastic, and my picture-pointing was usually augmented by the ubiquitous smart phone and its translation apps.
Invariably, after much typing, the phone was turned towards me, and on it were the words ‘It’s a bit spicy’. I always communicated that this was fine by me.

The iDocs documentary film forum kicked off with a speech-based ceremony at Beijing Film Academy, that I expected to go on for much longer than it did. Beforehand, a trailer filled with extracts from the selected films was looped on the enormous screen. Some of the crowd were asleep, some on their smart phones and some were paying attention. Dignitaries from various countries whose filmmakers were present, took the stage. A young Polish woman spoke impressively fluent Cantonese, whereas the avuncular Israeli Ambassador spoke in English, telling us that ‘his’ and the culture of China were the oldest in the world. With my father’s voice in the back of my head, I couldn’t help thinking that a tie wouldn’t have gone amiss.

All the film-makers lined up on stage and the mic was passed along the row to each of us. My ‘Ni hao’ elicited a little wave of applause with the huge audience and caught on with the other filmmakers who followed suit. My previous travels in Japan made me prone to bowing unneccessarily though and I made a mental note to try and rein it in. I was certainly far too smartly attired in my green silk dress, but I could at least hope it stuck in the audience’s mind and that they’d return when my film was on.

We film makers realised that our international array of films were not going to be screened with English and Mandarin subtitles (as is common in other international festivals) so, a little frustratingly, we wouldn't be able to easily watch each others films. Most of us agreed to exchange screener links later. So the enticing opening film, Twilight of a Life (which had been in several other festivals with mine, but which I hadn’t managed to see yet) was not one I could stay and watch as it was mainly in Hebrew. So most of the film makers got back into our minibus and were back at the hotel within an hour.

The fantastic Cherelle Zheng, film-maker and founder of iDOCS, had assembled a team of (almost all female) festival helpers who kept everything running smoothly, that is as long as we all had downloaded WhatsApp onto our phones and looked at it very regularly. Cherelle had curated and subtitled the impressive selection of global docs presented herself, an epic work. Most shared the theme of an exploration of love, and I would liked to have spoken to her more about her selection and its resonances with the Chinese audience, but as with all film festivals, it’s a bit of a whiteout for the organisers who have so much to do they often don’t even get to watch the films or the audience Q & A’s. 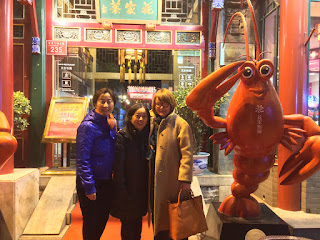 The screening of The Closer We Get drew an almost full auditorium of circa 300, and I sat in for the screening, which I rarely do these days. It was incredibly special to hear the audience’s ebb and flow of laughter and tears, a testament to Cherelle’s skillful translation. The Chinese reactions and questions afterwards (simultaeneously translated) were broadly similar to those in every one of the now over a dozen countries I have screened in, and it’s hard to describe how good this makes me feel. In a world of conflict, it’s beyond heartening to realise that we are the same at heart, everywhere. After the screening a small crowd asks for autographs, photographs with me etc. and I am introduced to a smiling woman who is in charge of marriage guidance in Beijing. She pops a pink scarf on and we have our photograph taken together. She is full of excited praise for the film, and I promise to her that I will get a copy to her for her organisation to use. 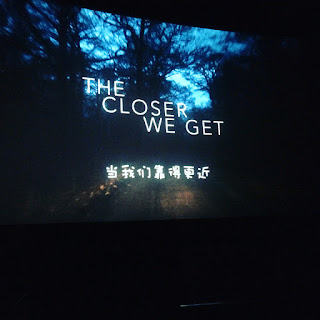 My ‘Masterclass’ was intended to be a delivered from my pre-prepared and pre-translated script, but instead it’s decided it should be in a ‘chat show’ format, opening out to questions informally. I’m okay with this, as I am now so used to talking about the film that I actually enjoy being put on the spot a bit unexpectedly. Some of the audience are clearly film-makers and field some technical questions about solo shooting and which parts of the film were ‘re-enacted’ for camera. But in general, questions are philosophical, and it seems that there is a hunger amongst the film-makers here to embark on personal stories but much inhibition and fear of offence. I try and talk about the ‘personal development’ aspects of my film, the terror I felt at its inception and how I overcame this, and I try and reassure them that whilst such films change a family dynamic forever, it can be the most positive transformation they will ever experience. 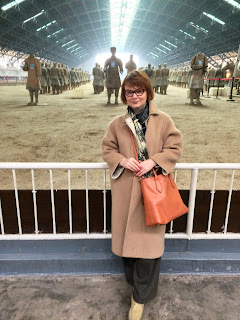 Xi’an is the nearest city to the Terracotta Warriors, so this is my first stop when I take the train out of Beijing. It’s a 5 hour high-speed journey, and my first class carriage has no laptop-entranced businessmen, as it would in the UK, just snoozing Chinese. It’s a marked contrast to the nonstop activity of almost every Chinese person you meet elsewhere. The ‘first class’ of the service is marked with luxurious recliners, a gift box of snacks and a woman who cleans the toilet after each visit. When I can’t find the flush and leave the cubicle, she takes my arm and returns me to the site of my shame, demonstrating the flush button in use.

Xi’an train station is beautiful, more like an airport than anything else, and I am the only Western face amidst the thousands of travellers. If there are 8 million inhabitants in Xi’an, there must be a restaurant provided for every single one. Eating places of all sorts outnumber very other shop at least five to one, and they range from ad hoc woks-on-the-back-of-bikes, to Korean barbecues to vast and eerily empty ‘banquet’ retaurants filled with circular tables each with a Lazy Susan at its centre. I choose what looks like a bog-standard one that is full of locals. As in every place I have eaten in China, I am the only lone diner - for the Chinese eating is an intensely social activity, and portion sizes make no concession to the smaller appetite. I eat an excellent ‘salad’ of beansprouts, cooked spinach, peanuts and strips of spongy wheat gluten, spiced with dried chilli and aromatic Szechuan pepper, with a room-temperature beer (the norm here) and chrysanthemum tea. Outside, charcoal braziers with lamb kebabs and vast arrays of condiments (seaweeds, mushrooms, Chinese cabbage, coriander leaves, sesame seeds, peanuts) are everywhere from dawn to late, and there are also pyramids of local pomegranates split to reveal their rich ruby interiors, candy-making stalls, spice-crusted tofu, and deep-fried-whole-anything stalls. They could teach the rest of the world a thing or two here, and not just about cooking. I awake in the morning to the unexpected sound of a Mosque’s call to prayer: Xi’an has lived peacefully with its large Muslim population for over 1300 years. 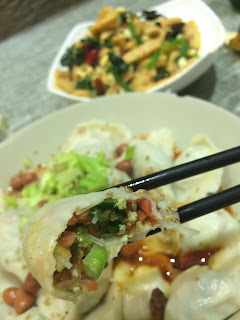 My brilliant guide Eric tells me about our forthcoming visit en route, to the Walrus Museum. I don’t remember this from my itinerary, and he’s talking as if it’s an important one, but I feel too awkward to ask for clarity. After a while of zigzagging through the city walls and out onto the freeway, hazy with smog, I realise his excitement is about the Warriors Museum. That is, the 8000 Terracotta Warriors Museum that will be today’s focus.

On the way in, as in every transport hub and visitor attraction in China, bags are security scanned. Eric tells me this is a quiet day, but nontheless vast crowds of Chinese people surrounded by tangles of selfie sticks are everywhere, screeching and laughing. It’s actually a delight to witness their joy here, and the lack of Western faces. How often we turn up at an attraction in the UK to find that there’s not a single other Brit in evidence, finding their own heritage worth a look. In fact, a Western face is so rare here that I am invited to join in a number of schoolchildren’s selfies, presumably for my sheer ginger-novelty value.

Despite the competition for a front row view of Pit 1 - which offers the ‘money shot’ of the ranks of warriors that I recall from the National Geographic magazines we devoured in the 1980’s - my first sight of this silent army brings tears to my eyes. Their number, artistry and preservation defies belief. Their sheer miraculousness is intensely moving. It has you thinking what else lies beneath our planet's mud, awaiting our future wonder. 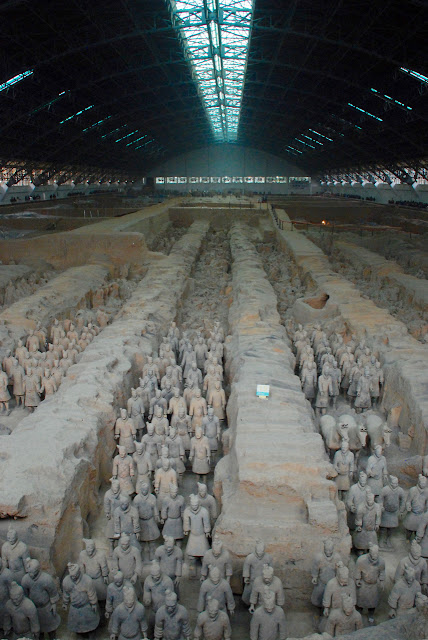 As we move around the vast sunken area, individual warriors in various states of preservation are visible closer to the visitor boundary. Their individuality and benign smiles belie their identities as warriors – as if they knew the afterlife would not present any real conflict to concern themselves with. Eric tells me contemporaneous written accounts exist that show that the Emperor’s top general in fact came up with the idea for the facsimilie army, to prevent his boss from slaying the 8000 best-trained soldiers in the land, and presumbly soldiers who would protect his son, the next Emperor. Like the sculptures of European antiquity, the warriors would have been gaudily painted originally (this is approximated in a rather shonky film projection that concludes the visit). What a fantastical, Disney-esque sight this would have been.

The steep, earthen walls around each pit strongly convey death, and they serve as raised walkways for the odd archaeologist with a wheel barrow, dwarfed by the arched roof and the crowds. The scale is akin to that of a football pitch. Eric tells me that excavation and conservation work here will have no end, and that China accepts this onerous responsibility. I am drawn to a large flat area near the exit with rows of regimented desks, spaced far apart as in an exam hall. Each has an overhead lamp, and behind them there is a hospital-style bed.
At one desk a single archaeologist bends over something far from our view, his lamp glowing orange in the cool, bluish haze of the enormous hangar. He has a lifetime of work ahead. 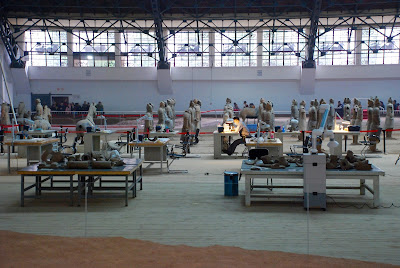